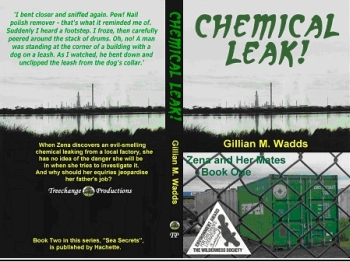 In November, 2006 I received a plaintive email from Lyndale Secondary College in Dandenong. They wanted 250 copies of Chemical Leak! for their Year 7 classes and had been told they were unavailable. Could I do anything? They asked me.

Originally published by Lothian in May of that year, it had sold out and the Lyndale teachers were desperate. The book was already on their list for 2007 and the teachers were looking forward to using it as their Year 7 novel. They also intended to keep it on their reading list for at least four years.

Very excited, I rang the publishers requesting a reprint but was greeted with: “No, there’s not enough demand.”

Another Publisher? I spoke to a couple of other publishers. They were very understanding of my problem but said they would not be interested in re-publishing a book whose sequel was already in the hands of the original publisher.

I really couldn’t understand why my original publisher wasn’t interested in a reprint. I was delighted that a school wanted to use the novel and certainly didn’t want to lose all those sales.

So I took a deep breath and decided I would have to begin the long journey to self-publishing.

First I had to request the rights back from the publisher. Once I sorted that out, I promised the school that it would be available for them in time for the 2008 school year.

And so — off on the Self Publishing road …

Secondly I bought a copy of: Self Publishing Made Simple by Euan Mitchell — absolutely invaluable!

Then I began asking for quotes from a number of different printers. Once I had decided on a printer and had all the information I needed, I had to:

This was all very interesting and rewarding BUT SO TIME CONSUMING!

Not much time left over for writing — which is what I’d really rather do!

But at last I was ready. I became:

Chemical Leak! was republished in 2008 as planned and the school very happily used it for their Year 7s for a number of years. A couple of other schools bought class sets for their libraries and eventually, all copies were sold.