In 1985, I was working in a school as a Teacher Aide. That was when I discovered that there were boys of 16 or 17 years who were basically illiterate. They could read hardly at all and some could only just manage to write their own name.

This subject became the basis for the story of Brian in
Who Cares?

And why did I write a play rather than a book or a film? Because I had many years experience in non-professional theatre. I wrote this play because, at that time, illiteracy was being swept under the carpet. No one wanted to know about the problem and no one wanted to talk about it.

Who Cares? first saw the light of day as a radio play on ABC-FM in August, 1985.

It received a produced reading by Melbourne Theatre Company and was then bought by the Royal Queensland Theatre Company (the ‘Royal’ in the name has since been dropped). It was an excellent production and was popular both with audiences and with reviewers. 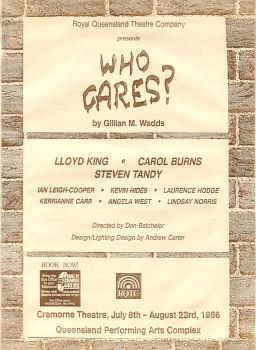 Some images and reviews from the Royal Queensland Theatre Company.

From there it was bought by the Queensland Arts Council and toured Far North Queensland – 23 towns in 4 weeks. Again it received wide public acceptance and good reviews.

In 1991 it was made into a Telemovie with a new title:

This was aired by the Nine Network in 1992 and subsequently received several late night re-runs.

Who Cares? has since had a number of performances by schools and non-professional theatre companies around Melbourne and overseas. For some years it was on the schools’ reading lists for senior grades.

I believe Who Cares? was successful because the subject matter of illiteracy was of great importance to audiences.

It is still VERY important to me and, in my junior novel, Chemical Leak! I again have a character who has to survive in today’s world without the ability to read and write. 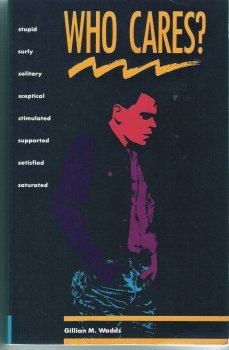 Who Cares?: is published by Currency Press in Australia, Dramatic Publishing in the USA and Cambridge University Press in the UK.

My early writing began with pantomimes when I was a young mother and an active member of Williamstown Little Theatre. My own children were of pantomime age and we adults all had enormous fun performing for an audience of enthusiastic children – particularly as many of them were our own!

Sleeping Beauty, Peter and the Princess, Cinderella, Aladdin and His Wonderful Lamp – all were received with great excitement from our largely undiscerning audience.

Who Cares? was written after quite a long break from writing and then, in 1996, I received an offer from Titanic Entertainments to write and direct for a Theatre Restaurant – and that’s another, very different story!