Can be played as either Theatre-Restaurant or a Stage Performance.

“How Are Ya? – A Cabaret for a Country Town. 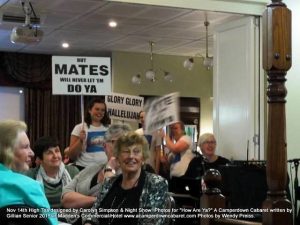 A rewrite of the original for use in different country towns.

Special songs focusing on a particular region will be offered.

If requested, they can be written to highlight local events or attractions.