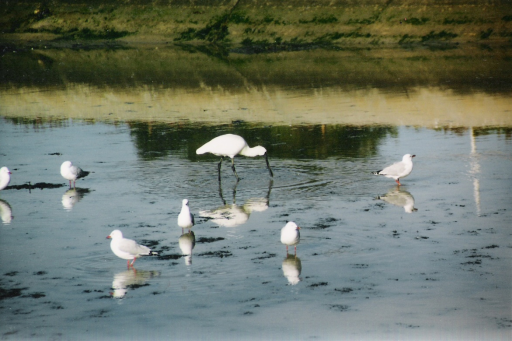 “I’ll only be a minute,” I said and slipped back into the water. I followed the reef for about five metres and, just as I expected, it started to drop off to the floor of the bay.

I was just turning to go back when I noticed something strange floating just under the surface. I swam closer and saw it was a buoy — a round ball of white foam plastic, tethered with a piece of orange rope. I looked down and, with a start of surprise, recognised something I had seen before. The rope was tied to a hessian bag.

I took a deep breath and dived down for a closer look. There wasn’t just one bag down there, there were four, tied together with the orange rope — and all quite full. There was something else, too; everywhere I looked were dozens of empty abalone shells.

Quickly I put out my hand and grabbed the orange rope holding the buoy. I was running out of breath but I had just enough left to pull myself down close to one of the bags. I touched it — it felt quite soft; there were no shells in this bag.

I bounced back up to the surface and pulled off my mask.

“What is it?” Jodie yelled.

At almost the same time I heard Mr Pirelli’s voice. “Okay!” he called, “Time to come in.”

They all started swimming towards the boat.

“Stop mucking around,” said Jason, “We’ve got to go in or he won’t take us again. Come on!”

Reluctantly I began swimming. Maybe I could persuade Mr Pirelli to bring the boat round to this side of the reef before we left.

The others were just starting to clamber aboard and I was about three or four metres away when suddenly there was the roar of an outboard motor and another boat came flying towards us. I was terrified the driver hadn’t seen me and got ready to duck under the water.

The boat came within a few metres, swerved around in a big turn and stopped. The man in it began to yell at us.

Quickly I swam over to the others. “What’s he talking about?” I said to Jason, “There’s no current here.”

The man kept yelling out, “No diving here! Too dangerous!”

“Okay, okay,” said Mr Pirelli, “Don’t get your knickers in a knot. We’re just going anyway.” He started the motor and turned back to us,

“Come on. Everyone on board?”

Tran was hanging onto the back of the boat and I climbed in ahead of him. As the other boat began to move away, he pulled himself in over the stern.

The man in the other boat turned back to look at us and I realised who it was. It was Tran’s uncle. He stared silently at us for a moment, then turned away and kept going. I looked at Tran but he avoided my eyes. 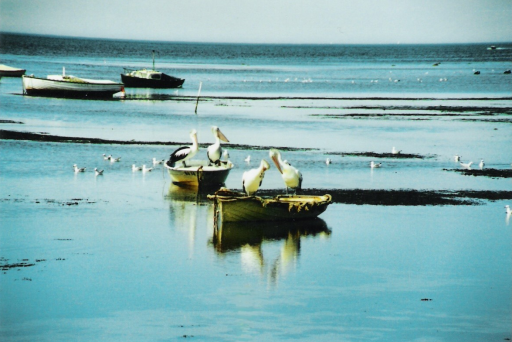 “Did you see the Nguyens?” I asked Jason, helping myself to the last of his chips. “What did they say?”

“I saw them alright. There’s no sign of Tran — and Mr Nguyen went ballistic.”

“All I said was that you were worried about Tran and did he think he should talk to the cops — and he went right off. “No, no!” he said, “Tran is perfectly alright. He is working over the holidays with his uncle. He will be back at school next year.”

“Next year! You mean we won’t see him till school starts again?”

“But, Jason, he wasn’t in his uncle’s boat. And if he couldn’t even snorkel a week ago, how come he’s wearing scuba gear? I reckon someone’s pushing him around.”

“The one who shouted at us?”

“Yeah. He turned up just as I was leaving the Nguyen‘s — Uncle Vo is his name. Mr Nguyen didn’t look too pleased to see him and I reckon…”

Jason stopped, his eyes wide. I turned to see what he was looking at. A man had just got out of a battered blue van next to the park. He closed the door, looked around and began walking towards us. It was Uncle Vo.

He stopped at our picnic table and slowly sat down on the bench facing us. His mouth smiled but his hooded eyes didn’t.

“You are friends of Tran?” he asked.

He stared at Jason. “You are Jason. You were asking his father about Tran?”

“Yeah,” said Jason nervously. “Where is he?”

Uncle Vo leaned forward onto his elbows and spoke quietly and firmly. “You are not to worry about Tran. He is perfectly okay.”

“But he’s only thirteen,” I blurted out, “And he can’t scuba dive!”

His reaction was sharp. “Who said anything about scuba diving?”

Suddenly I wished I hadn’t spoken, “I… er… Jason, didn‘t you say his Dad was worried about … um …”

Uncle Vo’s voice was suddenly harsh and menacing, “Stay out of this — both of you! Go swimming! Have fun! Your life is good. Not everyone is as lucky as you. Tran will be back after the holidays. You understand?” He stood up to go and then turned back to us. “Do not jeopardise Tran’s future,” he said. Then he turned and walked away.

We sat there and watched the blue van drive off. It turned the corner into the Esplanade and as it disappeared, we looked at each other.

“Should we go to the cops?”

Jason shook his head. “I’m not! Not after what Mr. Nguyen said.”

We both sat thinking for a minute, then I said, “I reckon we should wait for Sean to get home and talk to his Dad. When do they get back?”

“A couple of days.” he said. “Maybe tomorrow. I gotta go now. I told my Dad I’d only be gone a few minutes.”

We got on our bikes and rode together along the Esplanade. The beach, clean and sparkling, was on our right — the city, visible across the bay, was under a dirty cloud of brown smog. I shivered. It felt like the dirt of the city was seeping into our fresh, clean sea water.

We turned a bend in the road and both of us immediately jammed on our brakes. The blue van was ahead of us, parked on the side of the road. In front of it was a big, silver-grey car and standing on the footpath, talking to someone in the back seat, was Uncle Vo. His back was towards us.

We turned up a side street to the left and dumped our bikes on the nature strip. Carefully we peered back round the corner just in time to see Uncle Vo taking a large brown envelope from the person in the car. As we watched, the grey car slid slowly away.